Last month we were on holiday in our own country. From St Lucia, the east coast of South Africa straight up to Ponta do Ouro in Mozambique, then drove to the west to Kruger and via the Panorama Route returned to Johannesburg. A beautiful route where we passed the border two times. I actually forgot how it goes if you don’t have ‘open borders’. In Holland, I sometimes even forgot to take my passport if I went to Brussels or Paris for a weekend. There is a sign at the border so you know when you leave The Netherlands but more exciting than that, it doesn’t get. But fortunately, we live in Africa so we can ‘spice up our life’!

To get into Mozambique you need a visa and to avoid any hassle at the border, we have arranged this in advance. To require a visa you need to have a confirmation letter and an Alvara from your accommodation. I still have no idea what an Alvara is, but I got two documents via e-mail and that was sufficient. Besides this visa, your car also must meet certain requirements. For example, you need to paste a sticker of a blue triangle on the left side of your car (the reason is also unclear to me) and a fire extinguisher and two reflecting vests in the car. I actually forgot about that you first have to go out of a country, go through no man’s land and then enter the other country. Which means you have to pick up two stamps. The first border crossing from South Africa to Mozambique went very smoothly. I had arranged everything in advance so within 15 minutes we were two stamps richer!

The way back actually went almost as smoothly, but one way or another, a border always gives some stress. I think it’s because I mainly fly and I do not know the process ‘overland’ that well (not being a European border). Such unfamiliarity also entails uncertainty. And when you arrive with your big white man’s car at the border, you will almost literally be jumped at by a whole group of men who promise you to guide you through the border crossing as quickly as possible, provided that you reward them hugely for this, of course. I’m always thinking ‘is it indeed going to be such a hassle? Are they going to bother and let us wait until you give them money? What of course with a 15-month-old baby in the back of a warm car is not so conducive to your mood. I have had some experience with this in Indonesia. That was with a boat, and if my parents would not pay, we would be left at this little island in front of the coast. Pretty awkward. But we also had a similar experience travelling by plane. That remained ‘ overbooked ‘ until after two days of waiting we went to the Dutch Embassy and we could even go home that same evening.

We decided to try it first. I stepped into the ‘ office ‘. I saw a lot of counters, but nowhere a sign… Where to go? I decided to queue at the first waiting line I see. When it’s my turn, the douanier is going through my passport, clearly looking for a stamp. Then she looks at me angrily: ‘where are you going’? ‘Eh… South Africa?’ She sighs deeply and shakes hard with her head and then points somewhere behind her. ‘ Wrong queue, go, go ‘. Right. What exactly is she pointing at? I choose a counter on the other side in the hope that this is the right one and yes, although I am not looked at by the douanier, I do get my stamp! Mozambique out went very smoothly! Now we only need to enter South Africa.

We go back into the car and drive through no man’s land to the South African side of the border looking for customs. And the crazy thing is… We see 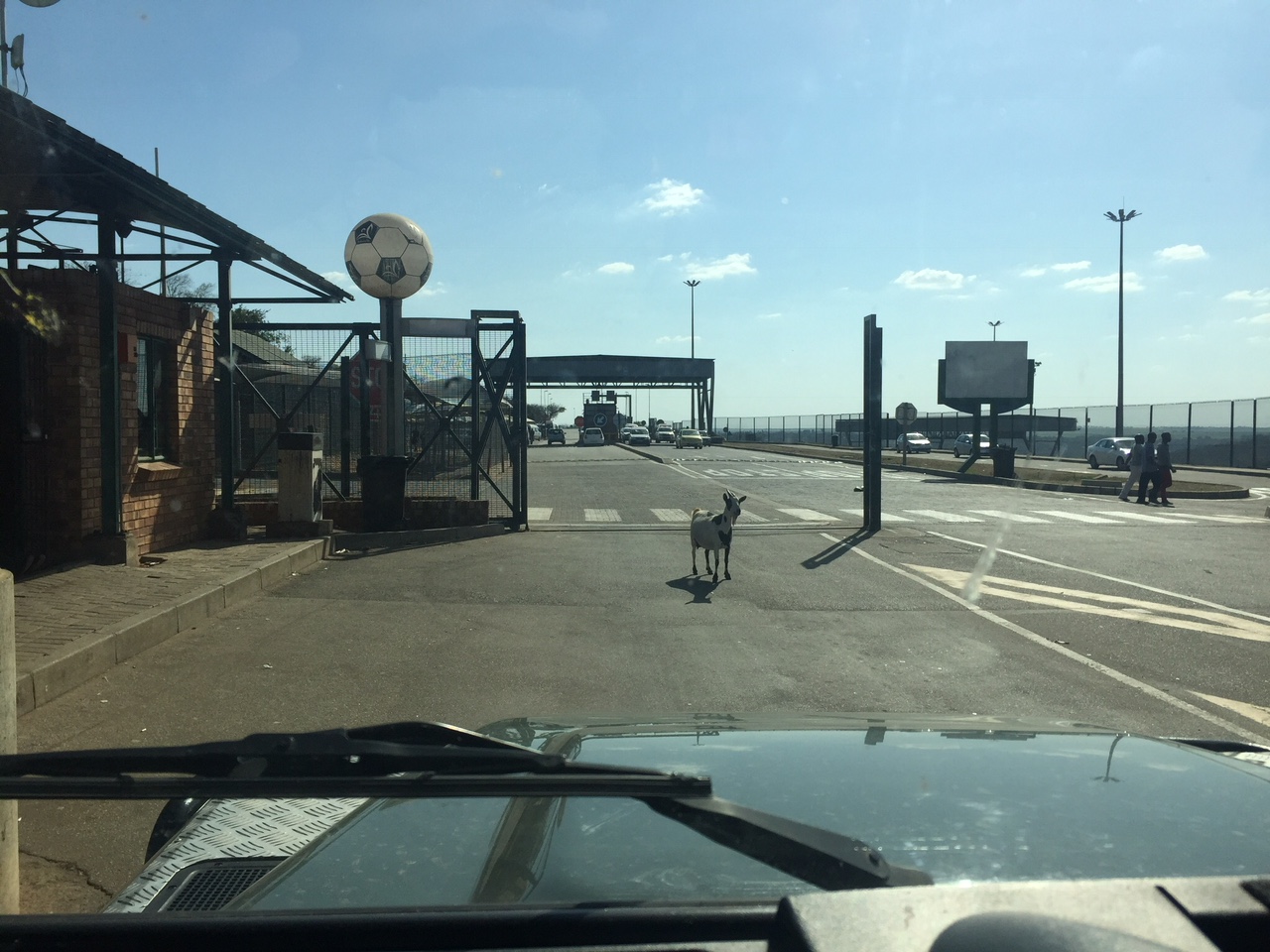 one office but that is on the other side of the road – if you want to leave South Africa and go into Mozambique. We drive slowly and no one who stops us until we seem to arrive at a final gate. ‘ This is not going well ‘ says Gerard. ‘We do need a stamp that we have come back into the country otherwise we will get in trouble next time we are at the airport. Because they will want to know how we could enter the country if they can only find a stamp that you have left it… Gerard knows. He already experienced this because he had two passports and made a mistake which one to hand over to customs. After enquiry, it appears that we have to go back to that office on the other side of the road. When it’s almost our turn, someone suddenly calls out loudly that everyone should go to the other side. Completely unclear why, but everyone walks out of the office and stands to wait in line on the other side. I am still trying to ask why, but we are dismissed. While we are waiting on the other side, seemingly the ‘ problem ‘ has been solved because we see new people coming in and they are simply being helped while we are all still waiting on the other side. Again, patience is a virtue.

All ends well! We have all our stamps and can continue our journey. This time, however, we were stopped just before we entered South Africa. By a goat, walking down the road. You gotta love Africa!